Memories of a Yatra

To take part in a yatra is an important part of the yoga tradition. It is to go on a pilgrimage to a place of spiritual significance. For practitioners of Ashtanga yoga, travelling to Mysore India, to study at the Sri K. Pattabhi Jois Institute of Ashtanga Yoga, is sometimes referred to a pilgrimage. However, this is more a modern day pilgrimage and Mysore is not necessary considered to be a place of spiritual significance in the ancient yoga tradition. For this, a yogi needs to travel North to the source of these teachings, to the Himalayas.

In October 2015, I had the chance to do this with my teacher, Sharath Jois for a one-week sadhana (spiritual practice) retreat in Uttarkashi, Uttarankand. The trip was especially symbolic, as it marked ten years of my annual study with Sharath and also the first time he had travelled to this area which held such significance to him personally. More than 140 people from 34 different countries travelled to India to be part of the retreat, that was organised jointly by Robert Moses of Namarupa Magazine and Eddie Stern of Ashtanga Yoga New York. Sharath was accompanied by his mother, and esteemed Ashtanga teacher Saraswati, the daughter of Pattabhi Jois.

The trip started in Delhi, where I met my good friend Margaret who I have known since 2006 after meeting in Mysore. Margaret teaches Ashtanga Yoga in Shanghai and we see each other just once a year in Mysore, and so having as much India travel experience as me, she made the perfect travel companion. I had travelled this part of the Himalayas in 2007 but hadn’t been back since apart from a recent trip to Dharamsala leading my own retreat for Ashtanga Yoga Dubai. It reminded me how much I love being in the mountains, particularly the Himalayas which seem to be super-charged with blissful energy.

After a five-hour train ride we arrived in Haridwar, also an important point of pilgrimage as the city rests on the banks of the Ganges. The city felt extra vibrant and alive, as it geared up for the nine-day festival of Navaratri celebrating the goddess Durga, Laksmi, and Sarawati. The next morning was a new moon day, a day for rest from asana practice, and the perfect day to take a sunrise dip in the Ganges. It was cold!

From Haridwar we travelled by car for an arduous eight hours along a windy road carved through the mountains. This area had suffered by major flooding and landslides in 2012 and the roads have only recently been made passable. They still seemed incredibly precarious and dangerous and I suffered from miserable motion sickness. It was a relief to finally arrive in Uttarkashi, a small town compromised mainly of ashrams and places of spiritual study, nestled in a valley along the banks of the Bhagirathi River. Enduring some form of hardship along the way is all part of the “yatra”. It is considered “tapas” the heat which helps burn through our conditioning.

The retreat was held at the Tapovan Kutir, a large ashram named for Swami Tapovan, who is well respected in India, particularly for being the guru of Swami Chinmayananda of the Chinmaya Mission. The ashram has had a long tradition of hosting spiritual pilgrims, but this was the first time for them to host a group of Westerns. We felt very honoured to be there and they also seemed very pleased that we had travelled great distances to come.

For the next week, we followed a daily program of morning asana class with Sharath followed by philosophy talks by either Sharath or the resident and visit swamis. I fell into a happy routine of rising at 4am to sit on the rooftop and enjoy looking at the stars, before our Ashtanga led class at 6am. Meals, taken at the ashram twice a day, were sattvic and simple, normally dhal, “subjee” (vegetable dishes) rice and chapatis, eating with the hands, in silence, seated on the floor. Having spent time in ashrams during my early trips to India I loved going back to this basic no-frills routine.

One of the most memorable days was when we left the Tapovan Kutir and travelled to the Sivananda Ashram around 10kms away. The night before, the weather had turned wild, with wind and rain, but the next day was completely clear and for the first time we saw the snow capped mountains in the distance. Sharath held his daily conference by the river in the sunshine. Our whole group climbed across the rocks to sit together, mesmerised by the view around us. Although it was more than just a beautiful landscape that captivated me. There seemed to be an almost palpable energy there and I felt incredibly light and free. It gave me an understanding as to why this area in particular, for thousands of years, has been the place of choice for yogis to retreat.

One Swami in his talks explained the significance of Uttarkashi. Varanasi or Benares, is the place for yogis to undertake their studies, studying the scriptures and important philosophical text. They would then travel to Rishikesh to contemplate what they had studied. And finally, they would retreat to Uttarkashi to begin living what they had learnt. Perhaps the energy of their intense sadhanas had left a trace on the land, or perhaps it has always been a power spot. All I know is that after just one week there, I felt I had been away for months and returned to Dubai changed forever. 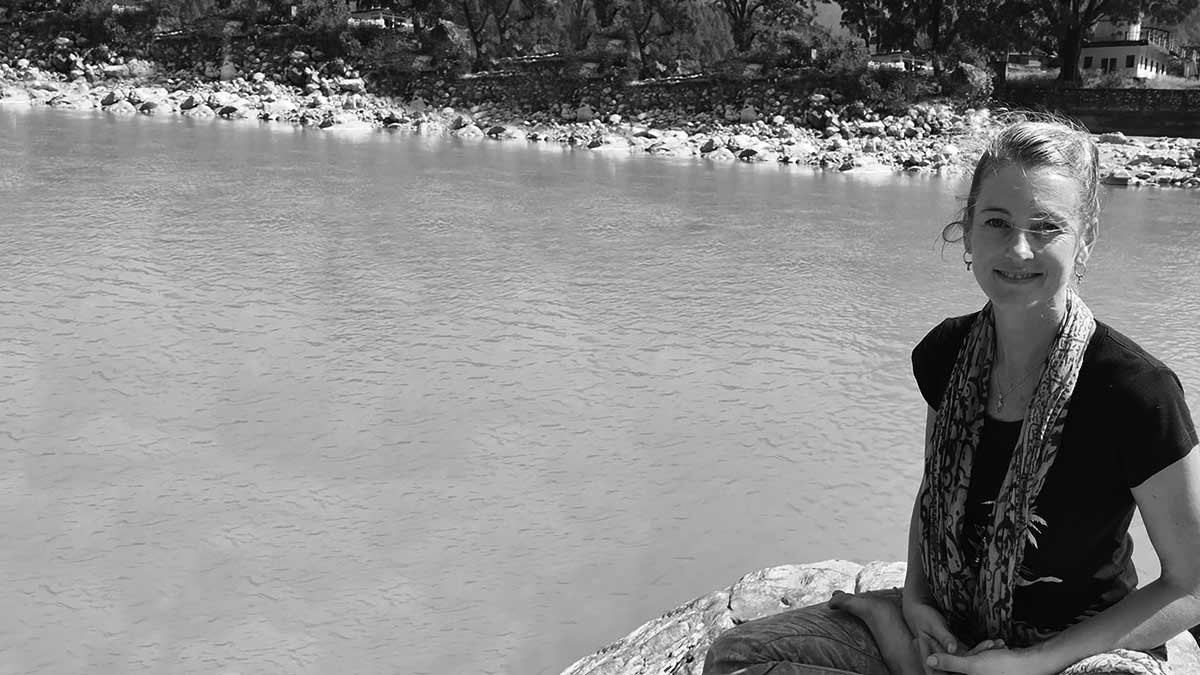